The bureau onderzoek en statistiek sent me a letter…once, twice, thrice. I could learn about persistence pays from them. Because finally, I did get the message and, as we say back home, ‘do the needful’. They invited me to take part in research and statistics and so I filled up the questionnaire they had requested me to. Their polite reminder letters (when I didn’t fill it up the first time) urged me gently on, convincing me that the information I shared with them was in trust and would be worked on anonymously. The considerate tone of the  letters ended in a signature (scan inserted style) of the mayor of Amsterdam. The letters also made it be known that the answers would take only twenty minutes of my time.

Do you take a detour when you come home at night?

Do young lads hang about in your neighbourhood?

Does your neighbourhood consist of people from many different cultures?

Do you think that the people from these different cultures don’t share your values?

Do you have difficulties in connection with people who don’t share your values?

Is there dog shit in your neighbourhood?

Is there rubbish on the streets in your neighbourhood?

I answered as sincerely as I could. Though I must say that I asked myself more than once how they knew this exercise would take only twenty minutes. Which department of research and statistics had figured that out and how, I wondered?  One of the options for some of the answers is the possibility to choose, ‘I don’t know/don’t have an opinion’. That’s kind, I thought, and could, in principle make the whole exercise come to less than twenty minutes.

But…like I said, after twice ignoring, when I did not ignore, then I did more. If they had had given me the possibility to express myself in ways other than choose from a sliding scale, I might have sent them some photos of my neighbourhood – taken a few days before I filled up the form.

This one for instance: 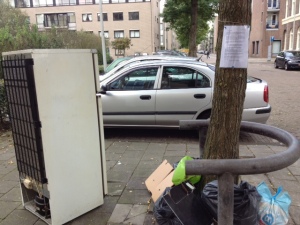 Here is a translation of the message on the tree, the paper ‘plastified’ against the rain and pinned neatly to the trunk.

Maybe it has come to your notice that of late, there has been a lot more street litter than before; plastic flies around here and there and a couple of meters away lies some something that resembles rubbish.

One of the reasons for this is that these days, rubbish bags are placed on the streets earlier than before. People from outside have more time to open the rubbish bags due to which the litter flies around and degradation is the consequence.

I request you therefore not to place your rubbish bags earlier on the street than what the municipality has put down as a guideline:

If these are morning timings are too early for you then you can decide to place your rubbish bags the evening before. You do however risk a fine from the municipality.

Have you missed a pick up? Then please keep your rubbish bag inside and do not place it on the street. This avoids degeneration of the neighbourhood. If we all contribute our bit then our street is in a short time clean and tidy again.

To be honest, when I think there is something in my rubbish that could be used by someone else, I risk the fine and put it out even earlier than the night before, as my neighbour here suggests. It increases the possibility of someone finding it.

I’ve wondered if it wouldn’t be a better idea for my concerned neighbour to place a request on the tree to return uninteresting contents into the bag and tie it again once one is done with it. Maybe with a graphic of how to do it best and fast.

In my neighbourhood in Mumbai, city of twenty million people, this got solved in another way. Cows ate up the flying about plastic. Though sometimes they couldn’t keep up with the amount of plastic my neighbourhood generated. I once read a news report that twenty kg of plastic had been found in the stomach of a dead cow.

So if the mayor of Mumbai would have sent me a letter requesting me to take part in research and statistics, what do you think s/he would ask?

Are the cows that roam your street hungry enough to eat up the plastic we have no time to pick up?

What about the dogs – are they doing a good job of finishing off the rubbish?

Did the people manage to get to the rubbish heap before the cows, dogs and flies (because to our minds, people come first)?

These thoughts come to mind not only because of all that I have seen with my own eyes in Mumbai, but also because of what I read very often in ‘Doing business in India’ books and websites sitting here in the Netherlands.  Indians, they say are very good at re-cycling.

And, as for my neighbour in Amsterdam, this is a picture I took a day or two later of the same place: 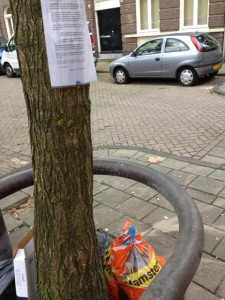 And a week later, this is what was left: 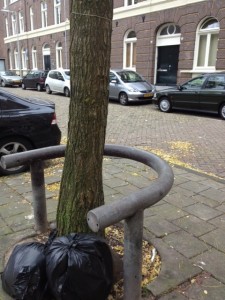 In other words, it wasn’t Tuesday or Friday evening or Wednesday or Saturday morning. This picture was taken on a Sunday afternoon, and my concerned neighbour’s message was gone.