Go to India to learn about the power of women in positions of leadership?

Lof, the magazine for women with ambition, Van Iren Consultancy and Friends Indeed, three initiatives led by women in the Netherlands are offering for the second time, a journey to know your talent and the power of female leadership.

Go to Indian villages in the back of beyond to learn about the power of women in leadership?

How can that be, you want to ask? This graph is to be seen in an article written by no less than the Nobel Prize winner economist Amartya Sen and Jean Dreze, a sociologist of Belgian origin who is so committed to India that he has taken on Indian citizenship. What they say in ‘putting growth in it’s place’ is that the downward trend of India’s social indicators shows that women and children are the worst hit. For instance, according to World Bank data, only five countries outside Africa (Afghanistan, Bhutan, Pakistan, Papua New Guinea and Yemen) have a lower “youth female literacy rate” than India (World Development Indicators 2011, online).

So what the hell can women who can hardly read and write teach our hoog opgeleid women managers in the Netherlands, that the latter should be shelling out almost 5000 Euros to learn?

In the 1980’s I went to research a documentary in the Indian Himalayan region famous for the Chipko movement –  ‘hugging the trees to save the forest’. It was spearheaded by women. It won the hearts and minds of millions around the world. Quite simply put, those women for whom losing trees to commercial logging meant the shredding of the very fabric of their economic and social life, hugged the trees and invited the contractors to saw through them along with the trees. I met one of these women, Kalavati Rawat and stayed with her. If you haven’t lived in India, then you probably haven’t learnt that for millions of women who have begun menstruating, getting out of the house alone is forbidden. She was one such. When she spoke of her days active in the movement, she said ‘ when I defied my husband and in-laws and started to go to those meetings, to travel and to experience, then I learnt that the world is my school. I learnt about feeding the mind’.

And why, should the same wonder of discovery not apply to the ‘top women’ managers of Holland who are going to be getting out there? Into those hovels in fishing villages where people live and work hard only to be ripped off by middlemen who come to claim their fish simply because no one taught them how to count. Until recently that is. And now those illiterate women of India’s declining social indicators negotiate with the same middlemen and have won one victory over another.

On one end of the spectrum are the fisherwomen who have almost nothing to lose; on the other, the ‘top’ women here in the Netherlands. An important ingredient they share is – a high level of motivation. Add some intelligent mediation (more on this by and by) and you begin to see the recipe for success.

So back to the beginning.  First, about the fisher and tribal women in India who are a part of the program. Booming India has passed them by, and also announced to the world that since India is no developing country, it doesn’t need foreign aid. ‘Friends Indeed’ of the Netherlands and their local partners ARDAR have started a micro credit program, got children and their parents to school and tackled health and sanitation. A location referred to as the ‘Campus’ in the vicinity of these villages where disabled children learn skills is to host the women managers of the Netherlands.

Anne Legeland is the director of Friends Indeed. A lawyer by profession, she says, ‘I went for the children. And for the women who told me that they lay awake at night next to their children who were howling because they were hungry. This, while the mothers were also hungry and knew there was nothing for breakfast. And this repeated itself every night’. Anne raised her own son herself, preparing law cases sometimes with a maxi – cosi on her desk. ‘I have a strong sense for justice’. After recovering from cancer and while recuperating from a serious car accident that followed, she decided to spend her life giving these women and children a chance at life. She is responsible for hosting the group in India at the ‘Campus’.

About the other mediators: Jolanda Holwerda and Annamiek van den Bosch of Lof, a magazine for ‘women with ambition’ are the trainer and logistics in charge respectively. Lof magazine’s latest issue ( in which there is a wonderful interview with Anne Legeland) has highlighted the ‘and, and’ of being a mother and a professional. Jolanda says, ‘ woman at the top’ – I found that a magical idea….The women at the top who I have met are wonderful women with the same ‘worklife’ issues’ as others. But I have a lot of respect and wonder for the way they manage in the tough business world, how they have remained true to themselves  despite all resistance they have faced’….I am happy I have reached my goal and provided a platform for women who want to fulfil their ambitions on every front – at home and at work’.

At the time of the ‘information evening’, Annemarie van Iren gives me a warm welcome. She’s the director van Iren Consultancy. In the course of the evening, she will speak about herself. How she decided the path her life would take by choosing for higher education for herself. She tells the small group of ‘top women’, gathered there in a meeting room at the offices of Clifford Chase in Amsterdam what she plans to do on this trip is to introduce them to the concepts behind ‘appreciative enquiry’. In some developing countries, this method is sometimes adopted to get on with the work of building a life. Through it, one focuses on what is and can rather than on what isn’t and can’t. In other words, one stays with the possibility of the positive and so becomes an agent of change.

Annemarie also takes the time to ask each potential participant on this journey what it is that makes her happy about herself. Is it something we stop to think about? All the prospective participants – without exception, give first credit for their happiness to their partners and children, and move on to life’s challenges as an employee or as a self-employed person.

I agree with the one potential participant on this trip who says ‘I give this trip as a gift to myself’.

For more information, please go to the website of Lof. 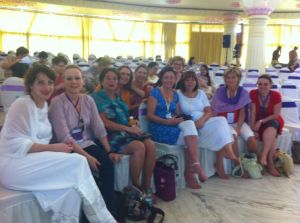