Before the time of computers, I had three accounts in the State Bank of India, and have kept them since – the sign of a very satisfied customer. So I was looking forward to opening a fourth, but this time in Amsterdam, not in the west, south or northeast of India. State Bank’s proposed entry onto the Dutch scene, announced in 2011 after the mayor van der Laan’s visit to India was one more sign of how well it could go. Despite, apparently, our Kafkaism, their Kafkaism.

At the end of September last year, the Indian Diaspora Conference had its annual meet at the RAI in Amsterdam. One of the sponsers was the State Bank of India (SBI). According to the program announced in advance, Mr. Prasad, the CEO for the Benelux region of SBI was to speak. He didn’t come to the conference. Was that a sign of things to come?

Last week the Financeele Dagblad announced that SBI, the biggest bank in India is angry at the Dutch National Bank (DNB) and has decided not to set up shop in the Netherlands. To quote:

‘While in the beginning, the DNB came across as very flexible, they are now much too severe’.

‘The SBI was insulted to the bone by the additional demands that DNB continued to make. They (the SBI) got lists after lists of questions and have pulled out in anger’.

So far, I mostly heard of the reverse situation. It was from the Indian side that much too much was offered, much too soon. Indians don’t like to say no, remember. ‘Yes, yes yes. Surely. Don’t worry, everything will be all right’. The extreme hospitality shown in a welcoming spirit and the ground reality of delivery that should follow a contract are two very different stories, according to those let down by Indian partners. Anger and non-comprehension follows for them who are foolish enough to be lured into the web cast by the Indian side, is the suggestion.

I have to recall another article I recently read. The headline says, ‘India is tired of all the foreign delegations’. This was published in ‘Transfer’, the journal for the internationalising of higher studies. According to Theo van Groothuizen, counsellor science and technology at the Dutch Embassy in Delhi, there is a definite ‘MoU exhaustion’ in Indian institutions. If the cooperation doesn’t deliver anything concrete, then India is not waiting for foreign partners. To quote him, ‘India can permit itself arrogance and ask what the other has to offer’.

In the same article, he says that it is not rare that Dutch delegations arrive in India and have no idea what they are coming for. They sit across the table with the most important of people and say, ‘how beautiful it is here with all the lovely colours. These unprepared delegations spoil it for other institutions’. Groothuizen is not the only person I have heard this from. The ‘Transfer’ article talks about how various delegations of higher education from different institutions in different cities of the Netherlands arrive week after week in India, but have never thought of forming consortia, where possible. According to Groothuizen, ‘it’s not possible in such a large country to understand why from a land as small as the Netherlands, one week a delegation comes from Amsterdam and the next week, one from Rotterdam. When everyone wants the same thing.’

He goes on to say how a Rotterdam delegation faced a lesson in humility when, after a speedy introduction in the office of a medical research institution in Delhi, the boss asked the university chairman, Van de Meer Mohr, ‘Which country do you come from, again’?

For the rest, the meetings continued in a pleasant atmosphere and points for cooperation were identified. Let’s hope Kafkaism didn’t take over like with the SBI entry into the Netherlands. 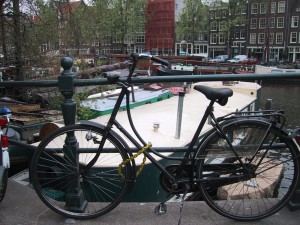