I once said to a friend, ‘shopping is a spiritual experience’ and she was at first surprised and later appreciative of why I said that. 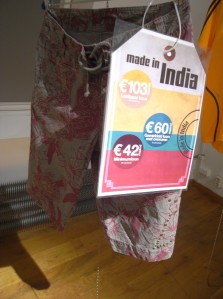 They’ve seen the news on jeugd journaal (a news channel for kids), and in the children’s  newspaper is an article about the building collapse in Dhaka. In class, they have had some discussions about how their clothing is made.

Not so long ago, we were in Brugge – a charming, historic city in Belgium. We wanted them to accompany us to a museum. One of them started crying and kicking all the way there. He just didn’t see why he had to go to a museum. His father and twin brother walked and I hung back – keeping an eye on my howling child, his unhappiness growing with every single, grudging step he took. My heart sank looking at him, and yet I knew I wanted him to see that museum.

Once in there, he got to see an exhibition on the making of lace in Brugge. He got to read about a lace-maker not so long ago. She spent 13 hours a day for 2 days making a lace handkerchief. The boss argued with her about what she should be paid and offered 2 fl. for it. After much bargaining, she paid her 2.5 fl. The boss then sold that same lace handkerchief for 15 fl. in her shop in a street not so far from where the producer of the lace lived and worked. 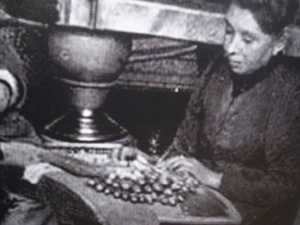 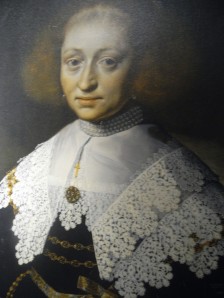 The lace that was made by women and children for a pittance was worn by wealthy, respectable people. Their portraits, painted by eminent artists, hung on the walls in the room next to the one with black and white photos of the sweatshops of Brugge. In this room, amongst the producers, of lace was a photo and a write up about Rumana, from Bangladesh. This is what it said:

‘I am Rumana. I am twenty three years old and I live in Dhaka, the capital of Bangladesh. I work in a clothing factory that manufactures clothes for shops in Belgium. It is possible that I sew your jeans, shirt or dresses.

I was born in a slum in Dhaka. When I was thirteen, my mother had a heart attack. She died five years ago. Our family had a tough time. In order to get enough to eat, I decided to stop school and wet to work in a clothing factory. My husband ditched me. I’ve been living as a single mother with my five year old daughter. I want her to get an education and this is why I have decided to continue to work here.

Mostly I work from eight in the morning to ten o’ clock in the evening. Often, I also work on Friday. Friday is a holiday in Bangladesh. Sometimes I work several hours overtime in a month. I never know if the overtime is paid for. The supervisors find a reason not to pay me.

If a supervisor misbehaves or uses curse words, you should actually not say anything and you should not protest. I do protest against the supervisor. If I don’t, then I feel like I have literally swallowed something’.

I point this out to my son, who has stopped crying by now and started to take some interest in what he is seeing. But soon enough, he says, ‘when are we going home’?

Yesterday his twin brother accompanied me to the super-market. We went looking for fruit juice. He insisted I buy a fair trade brand. A month ago, as a part of a school project, they had to choose a famous personality to dress up as. He chose to be Eduard Douwes Dekker, who was so critical about Dutch colonial policy in the early 19th century that he made history.

The visit to Brugge was in end December 2012. It is now end May. In these five months, an awareness of the rules that determine what they wear, eat, drink and play with, has arrived into the world of my eleven year old boys. It took a tragedy in Dhaka, (maybe Rumana’s life) and the reporting of it here to seal the deal.

It’s like a switch has gone on in their heads. 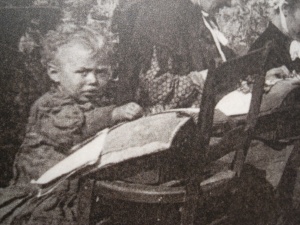