On a recent autumn day, while water-laden clouds and sunshine displayed behaviour as erratic as a cardiogram of a person in grave danger, I found myself following my nose. For no particular reason. And my nose led me to a place I had been to several times in the not so distant past.

I heard my heart hammer, even as the memories of hammering came back to me. Here, deserted today, on a school day, my children and their friends, then aged between seven and twelve, had built castles in the air. They’d imagined themselves to be adept at the task, and we had encouraged them in the enjoyment of their fantasies. The structures stand to this day as evidence of a particularly relaxed approach to lending out hammers and nails to young kids to have a go at building. Signs warning of loose nails and planks are around, as well as the clear message that building here is at one’s own risk. 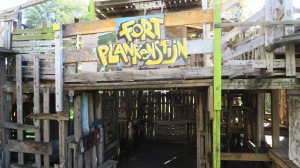 This is Amsterdam, and the place I am referring to has a name – ‘land of the young’. Over the years it’s been spruced up and the playground facilities have been vastly expanded, but some years ago, it had a fairly wild and untamed look and I loved going there with my children because of that. Building is just one of the many possibilities to occupy its target group. Others are swimming in open water on warm days, baking bread, shooting with bows and arrows, zip lining over water, observing farm animals, or ‘normally’ playing on swings, slides, monkey bars, climbing equipment and the like. All of this at no cost.

In a time when the X box, the Wii and the Play Station have pretty much conquered the hearts and minds of young and not so young alike, I begin to feel a wave of nostalgia for the land of the young. Obviously, some part of me tells me, it doesn’t have to be ‘either-or’. It can be ‘ and – and’. The Play Station and building castles in the air do not necessarily have to be mutually exclusive to each other.

Because, here in Amsterdam we can have it all.

Because here in Amsterdam, we can also pretend to be the shoemaker and go to bed, leaving the castles in the air behind. The inspectors, like the elves will appear at some point while we are at rest. They’ll get out their tools, climb and trod carefully, hammer nails here, and wrench them there, and, without messing about too much with the children’s fantasies, they’ll make sure those structures stand, and that no untoward sharp bits stick out. So that when the same little shoemakers or other ones are back, they can once more marvel at the workmanship, and choose either to improve or to build from scratch. 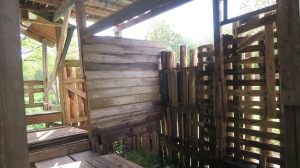 In the fairy tale, the shoemaker and his wife, poor people, won the sympathy of the elves who wanted to help them get rich and they did. When Mr. and Mrs. Shoemaker secretly discovered that their benefactors had no clothes or shoes, they decided to make these as Christmas presents and hid to watch what the elves would do. The elves, now suited and booted sang and danced: “Now we are boys so fine to see, why should we longer cobblers be?” But their help was not needed by then.

And here in the land of the young, the elves keep coming and the shoemakers should never get to see them.

The elves are there for folks like me, who want their children to enjoy building castles in the air.

Link to ‘Jeugdland’ (Land of the Young)