From my vantage point, I can see through the windows on the first and second floors opposite me. Three  screens. In each of them, women, single or in the company of other women.

I am playing ‘bluff’ with my companions in an Indonesian restaurant on the first floor on the other side of the street. The apartments are well lit, the night clear, we are above street level, and I sit facing a window that looks into theirs. It’s an open invitation that I will not refuse. A choreography of simultaneous movements meets my eyes… she’s opening a packet of chips, settling on a sofa, collecting a handful, showing a companion something on a mobile phone and laughing, getting ice out of a refrigerator. Soundless visuals to which I add a voice over in my head ….. “she’s just returned form a hard day’s work, wonder how much it cost to buy that property in the centre of this city…where is the car park… a full length mirror in the living room hmmmm curious …. I hope she’s not lonely…wonder if anyone else lives with her.” My voice over makes them out to be women who are paid for their work and take decisions about how and where they want to live. Mistresses of their own fate.

Earlier that day, I visited the ‘Open Air Museum’ in Arnhem. Whole neighbourhoods, houses and buildings have been dismantled from their previous locations and rebuilt here. In some of them, people in costume ‘dwell’ amongst the real objects and machines and communicate with visitors. This is how I could revise the workings of a steam engine and a windmill with some help. In other buildings, stories are told on televisions screens, like the one of Mr. Lau, immigrant from Hong Kong who started the first Chinese restaurant in Maastricht. The restaurant is there with its larder intact. 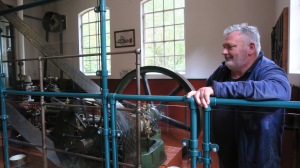 With so much to see and experience, one might have missed Madam Ines completely amongst objects that fit in the world of men of those times. A huge warehouse – a reconstruction of ‘Van Gend en Loos’ showcases the firm in the business of the transportation of goods to and from railway stations. From the time of horse run carriages to vans and trucks. Underneath the wheels of a carriage is a declaration: beautiful horses and beautiful women cost money to maintain. It is in this warehouse that Madam Ines is to be found on a little screen beside a full-length display of a male uniform and boxes and crates.

Madam Ines is in uniform too, and one has to strain a bit to hear her on the screen. The interviewer asks her why she decided to be a chauffer, the first in the Netherlands. There were personal reasons, she replies almost shyly. Yes, she had to follow a course, where she learned about loading and unloading cargo. Yes, she laughs, sometimes it is heavy work. We see her carrying a bunch of uniforms on a hanger, delivering them, getting a signature and driving her truck. 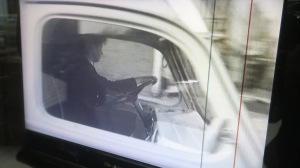 A subsequent search on the internet reveals little about Madam Ines. Did I hear her name properly, I wonder. Does it matter? She’s another ancestor of mine, who for reasons she didn’t share, stepped from one role into another, woke up in the mornings put on her uniform, and left home to earn her bread.

And now I see her through a glass, not in uniform, getting her dinner plate, and settling into a chair. Just another moment in the day’s routine. Only in another age.